There was a part of me that spent this week’s episode of How I Met Your Mother trying to will Ted to abandon his plans to move to Chicago. Don’t go, Ted. Don’t leave your life and friends. 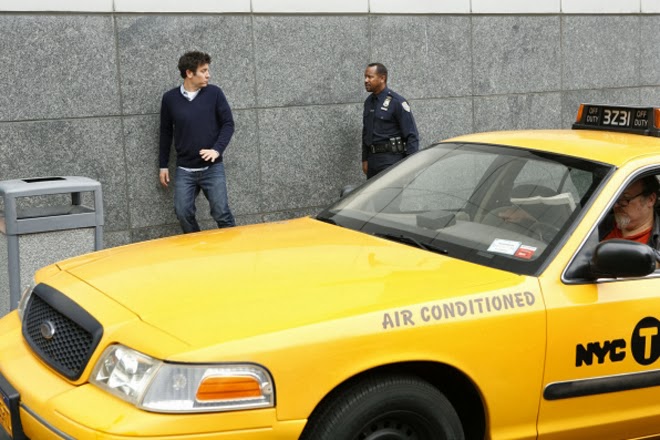 A little over two years ago, I moved away from the place that had been my home forever. Unlike Ted, the move was for a job. Like Ted in Farhampton, I spent the past weekend back home for a wedding. The weekend was a blast, and I got to see all the people I went from spending time with almost daily to now seeing just a few times a year.

The drives back to my new city always have that introspective moment when I ask myself, Did I really move for a job? That’s the reason I like to believe I moved, but did I really make the change just to create a fresh start? I wasn’t running from a girl, was I? Would I throw away a lifetime of relationships for those reasons?

It’s impressive that HIMYM has me this invested in Ted’s storyline. For years, Ted — the main character of the show — has played second (or third) fiddle to the the stories that focused on his friends. Barney and Robin’s on-and-off-again courtship, the death of Marshall’s dad — these episodes have been the ones to grab fans’ attention in recent years, all while Ted was stuck bouncing from relationship to relationship. We knew none of those women, no matter how hard HIMYM tried to sell them to us, were ever going to be The Mother.

Last Time in New York rightfully continued the course correction HIMYM needed. Ted’s decision to leave for Chicago last season along with the introduction of The Mother started to refocus the show. While Season 9 of HIMYM takes place during Barney and Robin’s wedding weekend, so far the show has been all about bringing Ted’ story home.

That said, I’m not sure how well this season’s format is working. Three episodes may be a small sample size, but thanks to Breaking Bad, we recently saw how much a show can do with three of its final episodes. While Breaking Bad was a mad dash to the finish line, with almost every second mattering, HIMYM is taking a much more scenic path to that point. Between last week’s episodes and Last Time in New York, Season 9 of HIMYM has felt less than a tight storyline and more like a series of vignettes punctuated by heartstring-tugging closing scenes. The two-episode season premiere was mediocre until HIMYM jumped a year into the future to give us a glimpse at Ted and The Mother finally together, with Ted revealing that he swore to himself that he would return to Farhampton with his future wife. This week’s episode wrapped up with one of my favorite Lily moments in a long time.

After going over the list of everything Ted wanted to do one last time before leaving New York, Lily pointed out to Ted that he had made a list of all the things he loved about New York. His students, the Empire State Building, their bar — these were good things. Why not, Lily asked, say goodbye to the bad things? Over a montage of Stella and the aftermath of hers and Ted’s wedding, Victoria getting onto a bus, Robin telling Ted she didn’t love him, Lily talked to Ted about saying goodbye to “all the times you felt lost, to all the times it was a ‘no’ instead of a ‘yes,’ to all the scrapes and bruises, to all the heartache.”

I’ve had my complaints about Lily over the past season or so, often feeling that the show’s writers never really knew how to advance her story. Did she want to be a mother? Did she want to run away and be a painter? Did she blame Marshall for not living that life? I’ve never doubted the friendship between her and Ted. Episodes like Last Time in New York drive home that these two are locked in. Sure, Lily may have become friends with Ted just because she started dating his best friend, but after so many years together, Lily is one of the few people who can give Ted the advice he needs.

Ted realized this too, telling Lily to flip over the piece of paper that his list was written on. The back side had one last item to check off: “Get one last life lecture from Lily.”

Will this be enough to keep Ted from running away? Based on the fact that Future Ted is still living in New York despite last season beginning with Ted at the train station ready to leave for Chicago, I think we know the answer to this. The Mother will be at that Farhampton train station. She’ll be the reason that Ted stays. I’d like to believe that Lily’s life lecture is in the back of Ted’s head, though. Don’t leave, Ted.

As I mentioned earlier, the rest of this episode, like most of this season so far, felt like a series of sketches. With their elderly relatives arriving, Barney and Robin spent the episode avoiding them while on a quest to find a safe spot to have sex. The couple was worried that they would soon become like those elderly relatives, people spending their years bickering. HIMYM gave us a brief zombie spoof, substituting old people for walkers attracted to buffets, coupons and Mandy Patinkin. After accidentally stumbling upon Robin’s great-grandparents having sex, Robin and Barney decide that they’ll still be the couple who wants to jump each other’s bones in 60 years.

Meanwhile, Marshall is still making his way from Minnesota to New York, driving through Wisconsin with Marvin and Daphne, his frenemy from the airport. Like any good Vikings fan, Marshall is disgusted by Wisconsin, a “Hellish, cheese-infested wasteland.”

Ted’s list of things to do before leaving New York happened to include “Come clean about April 26th,” which was the date when he and Marshall returned to the world of apartment-based swordfighting, something they hadn’t engaged in since 2005 when a swordfight ended in Marshall stabbing Lily. While Lily herself wasn’t injured this time around, Ted did slice the dress she had planned to wear to the rehearsal dinner in half.

Last Time in New York ended on a cliffhanger, with Ted, inspired by Lily’s talk, grabbing a bottle of Scotch and heading out to Barney with the intention of checking off “Have a scotch with Barney” from his list. “I saw you and Robin at the carousel,” was probably the last thing Ted expected Barney to say to him that moment. Next week’s episode is called The Broken Code, which I’m guessing refers to Barney believing that Ted had broken the Bro Code somehow during his in-the-rain rendezvous with Robin toward the end of Season 8. Is this where the bandage on Ted’s hand that we saw during last year’s season premiere come into play?

Hopefully HIMYM will begin to ramp things up over the next few episodes. I’m loving certain moments of this season — Ted and The Mother, Ted with Lily — but HIMYM shouldn’t be treading water any more. Where was The Mother this episode? What happened to her after she and Lily got off the train in Farhampton? I understand that she and Ted won’t meet until the last possible moment, but can’t we at least spend some time getting to know her better? Don’t waste this time, HIMYM. Ted may have wanted those extra 45 days with The Mother, but he’ll still have a lifetime to spend with her. We only have these final twenty-something episodes.

Notes and quotes
Barney’s still saying “ring bear” instead of “ring bearer.” How’s he going to slip an actual bear into the wedding?

Robin addressing Barney’s Bear vs. Bearer issue: “Look into my eyes and say, ‘I promise I’m not bringing a dangerous wild animal to our wedding.’”

Barney and Robin refer to themselves as “R-Train” and “B-Nasty.” Why isn’t Ted allowed to call himself Teddy Westside again?

Linus the Bartender is still there making sure Lily is never without a drink.

Lily describing her wedding speech strategy to Ted: “I’m just gonna wing mine, ‘cause if you get up there and speak from the heart, things good … mouth … words … memory … times … Can I take a peek at your speech?”

I’m so proud of Ted for fixing that graffiti that read “Your a penis.”

While Ted’s list included “Buy the whole bar a round of drinks,” his target time was a Tuesday at 10:06 a.m. Ted’s a hero, but a cheap hero.

One, objectophilia is a real thing. I did the research. Two, don’t google “objectophilia.”

Geez, the swordfight Last Time in New York flashed back to took place in The Duel, an episode from the first season of HIMYM. Long time ago, folks.

With Ted’s douchey tendencies, there was no way he would taste the Glen McKenna Scotch that Lily and Robin had replaced with cheap booze, chocolate syrup, ketchup and hand sanitizer and not felt obligated to describe it as “breathtaking.”

Another example of Ted’s pretentious Scotch expertise: “Thanks, Lily, I’m very aware of the Highland clumps.” Ted would later discover that those clumps were actually hand sanitzer.

James’ reason for avoiding the elderly relatives: “I’m gay, I’m black and I’m getting a divorce. Those walking skeletons are going to have more questions for me than their pharmacist.”

Robin reading Ted’s list thinking it was Lily’s: “Have a drink with my favorite students? Lily, you teach kindergarten.”
Ted: “That does seem pretty irresponsible.”

Lily reflecting on Ted’s desire to leave New York: “For a guy who loves New York this much, to leave it, you must really need to go, huh?”
Ted: “Yeah. I really do.”

Lily’s to Ted: “You wrote down all these things to say goodbye to, but so many of them are good things. Why not just say goodbye to the bad things? Say goodbye to all the times you felt lost, to all the times it was a ‘no’ instead of a ‘yes,’ to all the scrapes as and bruises, to all the heartache. Say goodbye to everything you really want to do for the last time, but don’t go have the last Scotch with barney — have the first Scotch toasting Barney’s new life because that’s a good thing, and the good things will always be here waiting for you.”
Lily notices that Ted is grinning.
Lily: “What … ?”
Ted: “Turn the page.” Lily: “’Get one last life lecture from Lily.’ You’re dreaming if you think that’s the last one of those.”