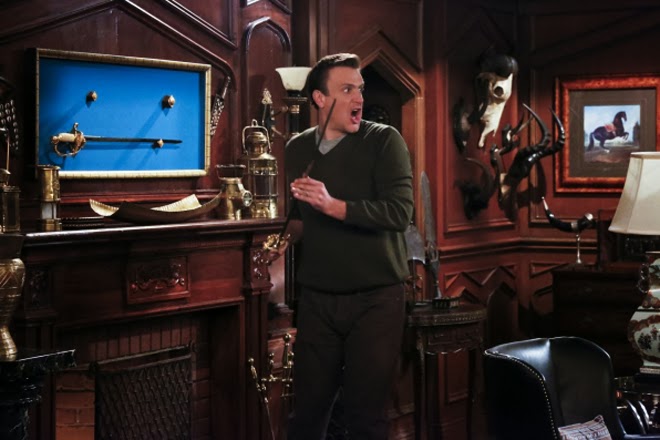 Did How I Met Your Mother already give us the answer to why Ted was so heartbroken during last week’s episode? During “Daisy,” this week’s episode, HIMYM answered one looming question … and possibly cleared up an even bigger question fans had after watching Ted and The Mother last episode.

It seems like forever ago, but back when Marshall and Lily fought in “Unpause,” Lily stormed out of the Farhampton Inn and got into a mysterious car after Marshall said some pretty hurtful things. Lily wasn’t gone for long, returning that very morning. With everything else that happened over the past few episodes — learning about The Mother’s past, Ted letting go of Robin, Weekend at Barney’s — it was easy to forget that, oh yeah, Lily got into some strange car and drove off into the Farhampton night, only to come back the next morning and agree to stay in New York City so Marshall could be a judge, even if it meant she would never fulfill her dream of living in Italy.

In “Daisy,” Marshall and his boys (Ted, Barney, Ranjit and Billy Zabka) started to put together the clues as to where Lily went the night before. Thanks to Billy Zabka’s 3 a.m. dirtbike and corn dog trip, the guys knew that Lily went to the gas station about five miles from the Farhampton Inn and then got into a car with the license plate “AHOY!!!” (Which, I should note could never be a real license plate. You can’t have exclamation points in a New York state license plate.)

An “AHOY!!!” license plate could only belong to one person: The Captain. It turned out that the ex-husband of Ted’s ex-girlfriend (we’re talking Zoey here) had a house in Farhampton, which is exactly where Lily went after her fight with Marshall. Ranjit drove the gang to The Captain’s beach house. After Marshall punched The Captain in the face (which interrupted The Captain’s singing housekeepers’ morning routine), The Captain swore to Marshall that nothing happened between him and Lily. According to The Captain and his fiance, Boats! Boats! Boats! commercial star/Robin’s former co-anchor Becky, Lily immediately asked to use their bathroom, stayed in there for awhile and then left the house.

Luckily, the Mosby Boys were on the case. (Well, just Ted. His sister wasn’t around.) Ted quickly broke down the case, surmising that all of Lily’s odd behavior that weekend was due to her taking up smoking while Marshall was away visiting his mother in Minnesota with Marvin. The guys quickly agreed that Lily smoked whenever she was away from Marshall, doing it while in Europe in college and while she was living in San Francisco after calling off her engagement to Marshall. Ted offered the theory that Lily bailed on driving to Farhampton with him so she could smoke, was chewing gum to cover up the smell and had ordered Linus the bartender to keep bringing her drinks to replace one vice with another. After her fight with Marshall, Lily needed a cigarette, but she was out and had no way to get to the store five miles away. According to Ted’s theory, Lily called The Captain to get a ride to the store, used his bathroom to smoke a cigarette and then hid the cigarette butt in the potted daisy in The Captain’s bathroom.

To prove his point, Ted dug into the potted daisy’s dirt to find the cigarette butt and pulled out …

Lily hadn’t been smoking. Marshall quickly realized that Lily’s odd behavior that weekend was due to a suspicion that she could be pregnant. She had to get out of Ted’s car on the way to Farhampton because she was sick. She actually ordered Linus to make all her drinks non-alcoholic. During “Unpause,” Marshall’s dig of “Are Marvin and I and any other future children we may have just some consolation prize?” was enough to break Lily, sending her fleeing from their room at the inn. In the lobby, Lily realized she couldn’t wait any longer to figure out if she was pregnant, called The Captain for a ride, bought a pregnancy test at the corner store and took the pregnancy test in The Captain’s bathroom.

The result of that pregnancy test? Lily was pregnant.

“Guys, we need to go back to the hotel,” Marshall said once he put together these pieces.

Once back with Lily at the Farhampton Inn, Marshall wasted little time telling his wife how much this meant to him. They would go to Italy so Lily could live out her dream of being in Rome. It was the least Marshall could do, since Lily was letting Marshall live out his dream of being a dad — again. Lily protested, saying they couldn’t move to Italy. There would be a ton of paperwork. Their daughter wouldn’t be American born. How could their daughter ever be president?

Which takes us to the big answer “Daisy” may have given HIMYM fans. After “Vesuvius,” it really looked like The Mother was going to die. In a flashforward to 2024, we saw Ted get super teary eyed when his wife wondered what kind of mother would miss her daughter’s wedding. Based on everything we knew at that point, The Mother being gravely ill really seemed like the most obvious reason why Ted would get so emotional at that point. Some fans suggested that it was really Ted’s mother or maybe Robin would would die before a wedding, but those solutions just never made sense.

After “Daisy,” we now have a possible answer that does make sense. At the end of the episode we got a glimpse of the Eriksen family a year later. Marshall and Lily had become fluent in Italian, fighting over Lily bogarting the Funyuns that Marshall had packed and brought with him from New York. When the couple decided to go out for some gelato with the family, we saw that Marshall and Lily weren’t alone. Mickey (Lily’s dad) and Judy (Marshall’s mom) were still together and accompanied their kids to Rome. With them were Marvin and the newest addition to the Eriksen clan, Marshall and Lily’s daughter, Daisy.

Yes, Lily was right that she was pregnant with a daughter.

Yes, this wouldn’t be as dramatic as The Mother dying. Honestly, it would kind of cheapen the heartbreaking potential that the closing moments of Vesuvius delivered. But, HIMYM has always been about misdirection. In Ted’s world, the thought of losing Lily, one of his closest and oldest friends, would drive him to tears. Six years later in 2030, Lily would be OK and the Mosby kids’ slightly annoyed attitude toward their dad’s very long story wouldn’t seem out of place.

We know, though, that Lily is alive and well in the future. In fact, a HIMYM flashforward could, in retrospect, have actually already addressed the fact that not only did Lily get really sick in the future but also that Marshall had to begin dealing with life without her. In the Season 3 episode “We’re Not From Here,” Marshall and Lily spent the episode putting together death folders and writing letters to each other that would be read after they were gone. In a flashforward at the end of that episode, we saw Marshall in 2029 opening Lily’s letter. We quickly found out that Lily was still alive (and that she didn’t leave Marshall the nudie pics he had asked for years before).

We won’t know for sure what the ending of “Vesuvius” really meant, but if this theory is right, HIMYM once again outwitted one of the biggest fan theories surrounding the show.

While Marshall and the boys were solving this case, Robin spent the episode reconnecting with her mother. In a brave move, Genevieve Scherbatsky faced her fear of flying, hopped on a plane and made it to Farhampton. There were a few setbacks, but who hasn’t scratched the face of their seatmate, had to be duct taped to their chair and accidentally opened an airplane door while on a flight?

The more Genevieve talked about Robin’s dad, the more it sounded like Robin was marrying a version of her father. Before settling down, Robin Sr. spent his days getting engaged to exotic dancers and tricking girls into sleeping with him through elaborate plays too. While “Daisy” ended with Robin’s mother assuring her that as long as Barney was a guy who would stand by her things would work out, this did seem a bit like HIMYM once again planting a seed that maybe Barney and Robin won’t stay together forever.

Notes and quotes
Apparently even though he’s spent years driving the gang around in cabs and limos, Ranjit doesn’t have a driver’s license and hopes that Marshall can use his judge powers to get him one.

Barney guessing what Lily did with The Captain: “That the Captain moored his dingy in Lily’s lagoon?”

Robin’s mom noting that she didn’t even know what Robin’s dad did for a living: “Every time I used to ask him, he’d just say —”
Lily: “PLEASE!”
Robin’s mom: “Yes, that’s exactly what he used to say. How did you know that?”

I love that HIMYM brought back Laura Bell Bundy as Becky. From Boats! Boats! Boats! to be the fiance of The Captain. Shouldn’t The Captain be worried that Ted has now been involved with both his ex-wife and new fiancé?

Like Barney, Robin’s dad has a gay black brother. Why isn’t he at the wedding?

Marshall after realizing Lily was pregnant: “There’s so much we have to do. We have to do research on hospitals in Italy.”
Lily: “We’re not going to Italy.”
Marshall: “Of course we are. Lily, we have to do this. You’re going to live in Rome. And you’re going to get your dream. Because you’re giving me mine — again.”