That’s more like it, How I Met Your Mother. After a season premiere that mostly setup, the show punched back with its second episode, coincidentally called Coming Back. I’ve said time and time again that HIMYM’s best episodes are the ones that put its characters’ hearts on display, like Marshall yelling at God in Last Words or Ted pleading for 45 more days — or even 45 more seconds with his future wife in Time Travelers. Coming Back did just that in its final moments.

Like The Locket, this episode plodded along, setting up the necessary pieces for Barney and Robin’s wedding. HIMYM excels at the slow play, and Season 9 is going to be all slow play. Picking up from the first episode, Coming Back saw the gang (minus Marshall, who is still stuck fighting Daphne for transportation back to New York) settling into the Farhampton Inn.

Ted immediately garnered the sympathy of the hotel’s desk clerk, Curtis. The Farhampton Inn is a place for romance, and Curtis can’t understand how the single Ted is going to enjoy his weekend stay there, constantly attempting to comfort Ted. I like Curtis. His schtick is the kind of joke that the more you keep poking at, the funnier it gets.

When Lily discovers that Marshall might not make it back in time for the wedding, she enlists the hotel bartender’s aid, ordering him to make sure she is never without a drink. This service is apparently known as The Kennedy Package, something I’ll have to remember next time I’m at a wedding. (Uh oh … I’m going to a wedding this upcoming weekend.) Based on service like this, the Farhampton Inn is so much better than the hippie place Ted and Stella almost got married at. 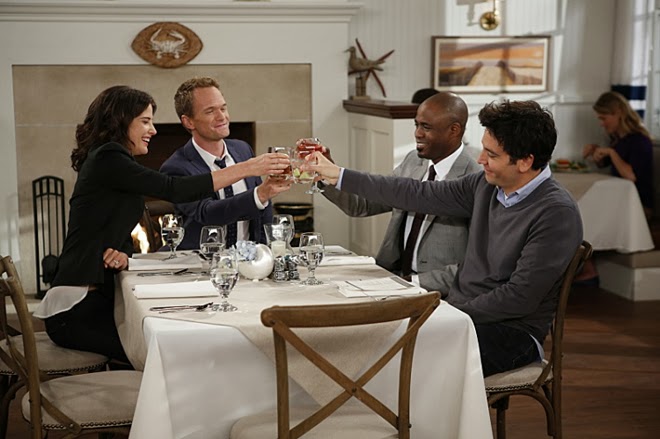 While Barney is away, James reveals that he and Tom had broken up thanks to James’ cheating. What? No! They have a son! Poor Barney’s tux-wearing baby nephew. Robin orders James to not tell Barney, fearful that if her fiance knows that the one marriage he believed in failed, he would walk out on their wedding.

I was a bit worried here that HIMYM was going to jump back on this plotline, especially after I praised the show for dropping the “Will Barney and Robin make it?” teasing with the season premiere. Thankfully, Barney is done with that game too. When Robin finds him at the front desk, she assumes the worst, which would be Barney asking for the nearest, dirtiest strip club. According to the ever-helpful Curtis, that would actually be two different strip clubs, but Barney isn’t interested in that. He was only getting the key for James’ room in order to remove the creepy yet edible gifts he left to celebrate his brother’s anniversary. I’m not sure where you buy marzipan men, but Barney was able to find both a chocolate and a caramel one, which would’ve been a great gift for James and Tom if they were still a couple. I guess.

Barney’s not going anywhere. This wedding is happening. I spent a ton of time last year wondering whether or not Barney and Robin were going to happen. In HIMYM’s attempt to pad out Season 8, a clear focus for the duo was lost, and their courtship was muddied. I don’t think the show’s writers ever meant to instill so much doubt in Barney and Robin, but it happened anyways. So far HIMYM is two-for-two this season when it comes to delivering episodes that have Barney and Robin going full steam toward marriage.

While sitting in the inn’s bar, Ted had a talk with James. With his marriage over, James was feeling out of place at Barney’s wedding. He’s seen how a marriage can end, a bummer of an outlook during a wedding. As someone left at the altar, Ted knew all about bad weddings. “You’re not giving up, James,” he told Barney’s brother. “And neither am I.” James left the bar, leaving Ted alone to do his crossword puzzle.

Last season, HIMYM broke our hearts with Time Travelers, the episode that not only revealed Ted sitting alone at MacLaren’s while his friends lived their lives, but also gave us his teary fictional visit to The Mother’s apartment, where Ted spoke of the family they would someday have and how much they would love each other. I watched that episode again this past weekend, and it’s still a tough scene. Sure, there are theories about what exactly Ted’s words meant, but even at face value, we saw a broken Ted looking for hope. He was alone.

With James gone, Ted is once again alone. Barney and Robin are about to be married. Marshall is (hopefully) on his way to Farhampton. Unlike with Time Travelers, though, HIMYM gave us that hope Ted was looking for this time. Jumping exactly one year into the future, the show paired Ted and The Mother for the first time, putting Josh Radnor and Cristin Milioti in a scene together.

“One year ago today, I made a promise to myself right at this table,” Ted told his … wife? Fiance? Girlfriend? I forgot to check for rings. At this point, the two are a couple, but I’m not sure what kind of couple. That promise? “I’m coming back … and I’m bringing you.”

Sitting at that table, doing the crossword in the most showboaty way possible, Ted swore that he would return a year later with the woman who would become his wife. He didn’t know who she was. He didn’t know where she was. He only knew that she was on her way, trying to get there as fast as she could.

All of HIMYM has been leading up to this. The false starts. The butterfly tattoos. The failed engagements. Robin. Victoria. Stella. Zoey. This is what we’ve been waiting for. This is what we were promised almost a decade ago, and now we’re finally watching it happen. As The Mother told Ted, “I’ll be right here.”

So far, HIMYM got The Mother right. This wasn’t an easy casting, but the showrunners appear to have done the impossible. They found Milioti, an actress who looks completely natural being a part of the HIMYM gang, whether it’s sharing cookies with Alyson Hannigan in The Locket or listening to Ted’s destiny driven dreams during this episode. I can’t wait to see the moment Ted and The Mother meet for the first time.

Oh, Marshall is still trying to get back to New York. When he and Daphne, his former seat neighbor who got kicked off the plane with him, found out that there were no more flights to New York thanks to a storm moving up the east coast, they took off to rent a car. Marshall asked the Universe for a favor and was rewarded with an elderly yet wicked quick rental car cashier. Marshall got the car but didn’t have a car seat for Marvin. In the most Minnesota display of trust, Marshall took up Daphne on her offer to take the car, go out and buy a car seat and then return to pick Marshall and Marvin. Surprisingly, Daphne actually came back. Wacky road trip adventures are in store for us, right?

Side note: That storm on the east coast the flight attendant mentioned? Could that be the one that brings the rain that causes The Mother to bring out the yellow umbrella we saw in last year’s season premiere?

Notes and quotes
Daphne refers to Marshall as “Growth Spurt.” Not quite Big Fudge or Vanilla Thunder.

Barney in response to Marshall protesting the idea of dropping the Minnesota nice act: “There is no What No Barney Are You No I’m Not Gonna That’s No.”

Look, I understand that Marshall, the environmental lawyer, doesn’t like the idea of driving a 2006 Monstrosity (even if it is the smaller Sport model), but wouldn’t getting home to Lily and the wedding overpower anything else in this situation?

Lily in response to Robin continuously citing James and Tom not her and Marshall as the couple that made Barney believe in marriage: “I hate everyone at this table.”

Robin after seeing Barney’s anniversary gift for James and Tom: “I love chocolate marzipan.”
Barney: “So does Tom. Used to, anyway.”